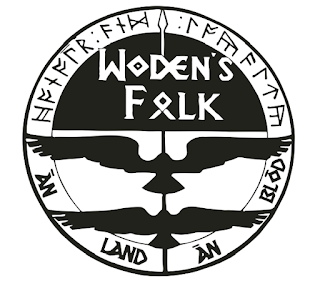 Welcome to Woden's Folk which produces the Folkish Magazines that we publish, and any other leaflets, pamphlets or whatever else is needed to spread Folkish Wodenism amongst our Folk. Woden's Folk has another role, that of promoting the esoteric side of the Woden Folk-Religion - the Woden Mystery Religion. This in itself is not an 'organisation', nor is it a 'group', except in the sense that some WF-C Activists may take part in certain esoteric active work when this is necessary. Active work such as Folk-Moots and other exoteric activities are done through the Woden Folk-Community.
As Folk-Warder of Woden's Folk my own job is to publish the magazines, leaflets etc. either as paper-copies or online work. We like to stick to paper-copies for the magazines so that there is a more permanent copy to keep into the future - I think that most people are well aware what can be done by those who control the World Wide Web of Illusion! This is the easiest way to 'control the past' in the words of George Orwell - erase what you don't want people to see. It is harder to produce paper-copies, but we will not take the 'easy way out' because that is exactly how our people have been chained to high-tech slavery. We wish to break those chains in some small way!
The second role of Woden's Folk is to work at an esoteric level, and to do so we have produced an Esoteric Magazine - Spear of Woden - which was not put out last year (2021) but which I hope to put out again later in 2022. This will probably be an online magazine. Our esoteric work involves ritual work, talismanic work, meditation-visualisation, and active work by trying to get people to do certain key rituals that we create - such as the 'Fires of Revolt' we did years ago around England. Woden's Folk is the 'hub' of the 'Wheel of Woden' and from this we attempt to create active work that will be effective here in England.
Woden's Folk is also involved in the key roles of survival, woodland work, wild-camping and other pursuits, but the work here involves being linked to esoteric work. The Ar-Kan Rune-Lag System has been created not only to build a working-knowledge of the 33 Ar-Kan Runes, but also as an Esoteric Warrior Arts, designed to create the Cultic-Warrior. I have published books on Esoteric Wodenism in the past which have been well-read; we shall advertise any new books or booklets on this site - in fact, I hope to produce booklets that can be downloaded from this site.
There are no doubt many individuals out there who have followed and supported our work over the years and no doubt there are some who would like to get involved in some way. Those who wish to get involved in the Woden Folk-Community will need to go through a minimum of 12 months Wodenic Apprenticeship in order to get involved and/or join a local group (where there is a local group). Those who would like to do so can contact me at the contact address given later - I would ask that anyone who does wish to do so contact us via the BCM Woden Box. I know that this is 'old fashioned' but what we would like to see is some form of commitment by individuals in that they will show their willingness to put themselves out a bit, since our commitment is to a higher cause - the Folk.
For those who do not wish to commit to this at such a level, I am going to create a new kind of 'online group' that will offer the chance to do active work as an individual - but within the context of being involved with others who will be doing the same. This may involve the following -
The aim here is not just to talk but to act, which is what has to be done if we wish to regain our freedom, our Folk-Nation and our Sacred Land. There are things that we can do at an esoteric level that can have an effect upon the physical world. But this will take commitment on the part of those who wish to get involved because doing these things needs concentration which unfortunately many people today have trouble with. This is because everything is 'fleeting' and most things are done for us - this we need to change in ourselves. This change must come through changing ourselves, after which change will come in the world - if enough people commit to doing so.
The bulk of any movement is that of supporters, from which arise the activists who do the work for the movement - both are necessary. However, in view of the predicament that we are in today, and if we wish to leave a future for our children, and their children, then we need to create a movement with as many activists as we can. The more activists stronger the movement - and we can do this now through the two-fold program of the WF-C (at an exoteric level) and WF (at an esoteric level).

Most of us are also in a position where we will be less able to travel far as things get more and more expensive - so this project will get around that to an extent. And there is also another advantage in that as this grows those involved will no doubt be able to meet up with others of like mind locally - that should be the aim for us now, since strength in numbers will be vital as the Old Order breaks down. This will build the Woden Folk-Community in the process, and this is the main thing that we aim at.
The way that I shall do this is to place a post on Telegram (WODEN'S FOLK) which will redirect to one of the Inglinga Blogs on which details of the activity will be posted. Those who wish to take part may then just get the details and get on with it in their own way. I shall post on Telegram (WODEN'S FOLK) when this project will start. Those who are looking at this and do not have Telegram can easily set it up - but use the Telegram web address to download, and not through Google. This ensures some form of privacy.

We shall use the name WITHSTANDAN which means 'to withstand' or 'to resist' - Resistance - for this project. Anyone who wishes to take part should do so at their own initiative. Just look out for the posts on Telegram when this is set up.

The Sword of Wayland Magazine is produced by Woden's Folk; it is published three times a year for the price of £20.00 which can either be paid by -
PayPal - Widar58@gmail.com
Cash - sent at your own risk to BCM Woden, London WC1N 3XX, England.
Available as printed edition only in the UK.

Overseas Online Edition - send £10.00 by PayPal - Widar58@gmail.com (Please ensure that you give us an email address to sent to).
Posted by Wulfinga at 03:41
Email ThisBlogThis!Share to TwitterShare to FacebookShare to Pinterest 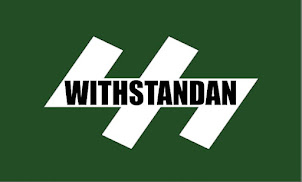