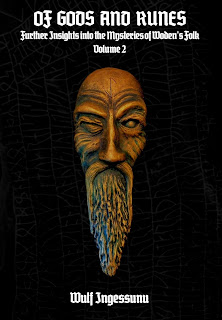 Copies of OF GODS & RUNES: FURTHER INSIGHTS INTO THE MYSTERIES OF WODEN'S FOLK - VOLUME 2 by Wulf Ingessunu are now available to pre-order. The book is 160 pages in length and costs just 22 EUROS with free postage to anywhere in the world. Our PayPal address is blackfrontpress@yahoo.co.uk and you can find more details below. We also accept bank transfers. Cover art: Anders Nilsson / General design: Francisco Albanese Pastene.

ESOTERIC FOLK-MOOT - This is not the sort of activity that can be done without knowing that we can hold it without problems, so I am keeping tabs of what is going on before this will be arranged. At the moment I have the added problem of not having transport since my truck failed its MOT and would have cost too much to repair. I am trying to get another of the same make and model because I have this stored for spares. This means getting another will take longer but it seems wise to do this now. So the idea of a Day-Moot in march here in the South of England seems out of the question at the moment, so we shall leave the organisation until later. I do have plans for local Area Folk-Moots in the South of England, but due to the situation at the moment we shall not divulge plans for them.

QUARANTINE CAMPS - Two films that I watched (both in part become this becomes boring after a bit) featured a 'pandemic' and both featured 'Quarantine Camps' where people were incarcerated (there is no other word for this) when they had the virus. One of them was about a 'mutation' in 2023 which is a mere two years away; this suggests that the source of the virus may not be accidental, since unless these people are (like Bill Gates) a seer or prophet how the hell do they know this would happen, when it does actually come about? A flu virus does mutate, as historical examples show, but there is so much fuss made of this that the whole thing becomes suspicious. Are we to see the return of the gulags, where millions of Russians suffered and died? Here in England we have the dubious honour of being the first to use Concentration Camps in the Boer War, so this would not be something new, only new in that they would be used upon our own people this time. These Globalists tend to show us what they are going to do before they do it, so we should be aware of this because it gives time to think on what we are doing.

If anyone thinks that we are coming out of this then I would feel that they need to think again. This is thus no time to slow down on the prepping, education and wilderness training needed to face the emergencies that must come, and will come in some way because we are ruled by idiots who have no idea what they are doing. But in doing this we should not neglect the spiritual education and training which is just as important.

The Guerilla Survivalism blog has been posted up a lot more lately because I am trying to help our people to prepare in some small way for any problems, disasters or drastic changes that may lie ahead. This is not a sort of 'Go-Bag' or 'Bug-Out Bag' affair where one gets up and goes off into the wilderness, but rather a more mundane approach which is more practical for most situations. In 99% of the situations we would face staying at home would be the best means of survival, but there is the odd 1% chance of the former, so we have to prepare for this, even though perhaps not putting so much emphasis upon it. Featured more is the idea of prepping, growing food, wild food with ideas on how to build shelters, light a fire, and find and purify water - the basics for survival at home or away from home.

One aspect we have not as yet covered is home-security which is perhaps the most important topic we shall need as things get worse and worse. With the increase in stress, anxiety and frustration something sometime has to give, and we may be faced with a social breakdown, a civil war, a revolution or with all the racial tension being pushed by the Marxist arm of the Globalists we cannot rule out a race war against our people. The future, looked at that way, looks rather grim, so home-security is very important. I am not going to cover this here because like car alarms the best thing is for the individual to use a unique system that no-one else does, thus no-one else knows how it works or how to get around it. But I have mentioned this in order to make people aware that their home is their 'castle' and they may need to protect their family some day, and even if not making it secure works against the common criminal, and when the Covid-Cops are more interested in booking people for supping coffee on a bench, or eating chips in their car, then crime is going to go sky-high here. Crime will certainly pay whilst they are making 'criminals' out of the Common People. And 60% of these naughty people are not paying their fines!

Posted by Wulfinga at 11:07 No comments: 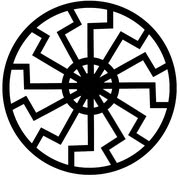